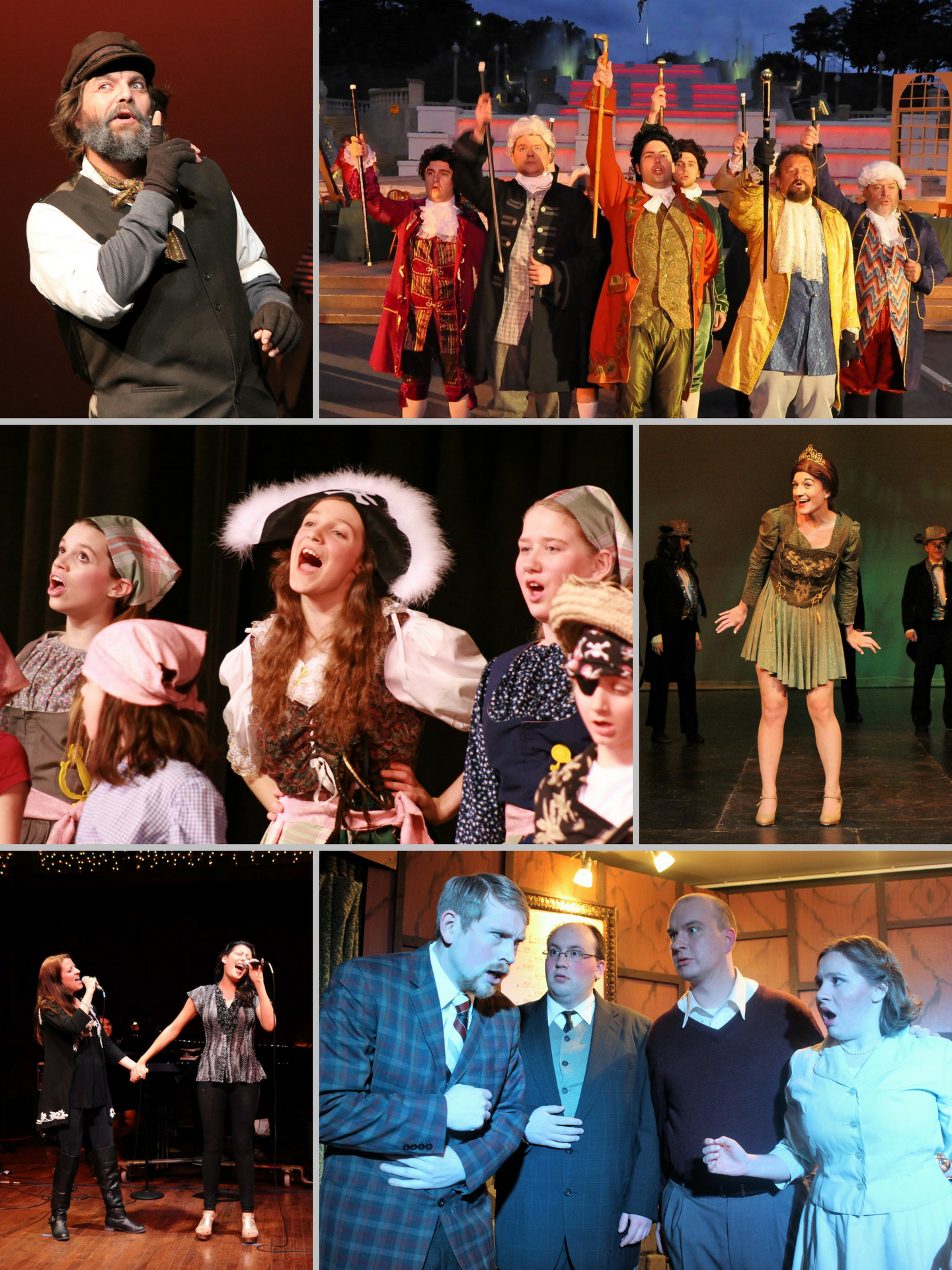 Unless otherwise noted, all board meetings take place on the second Wednesday of the month at 6:30pm at First Congregational Church, 120 N. Jackson St, Jackson.  Board meetings are open to all members. Non-members are welcome at the beginning of each meeting!

Welcome to the Board

You do not have to be interested in being on-stage or backstage in order to be on the board of directors, as we are always in need of those talented in business, organizational development, marketing, and more to help keep this non-profit running smoothly. We are looking for dedicated people who are passionate about bringing theater to the Jackson community, with a variety of backgrounds and talents. Do you know someone that fits this description?  Feel free to forward this information to them and suggest that they contact us for more information about our needs in the upcoming season!

If you or someone you know would like to help Center Stage Jackson in its mission of cultivating, advancing, and promoting the appreciation of dramatic arts in the Jackson community, contact us at [email protected]! Lisa Cryderman is a Jackson Public School teacher with long ties to this community. She has been a performer, a producer, and a director with theater groups in this community and surrounding counties for over 30 years. She has loved theater as a hobby and a passion since high school. Lisa has served on the Center Stage Jackson Board of Directors in the past holding the offices of Secretary and President. She has participated with and chaired various CSJ committees, currently serving as chair of the Marketing Committee. Her goals for this organization are:

Wendy has participated with Center Stage Jackson since January 2015. She especially enjoys helping with CSJ’s Youth Theater. Wendy has participated in several youth productions as stage manager. As a member of the CSJ Board of Directors, Wendy’s goal continues to be expanding into our community, getting people involved with everything community theater offers. Wendy reiterates, “We are COMMUNITY Theater!”

In 2018, with the help of a fantastic committee, Wendy organized the first annual BBQ cook-off fundraiser – “Porkapalooza” and continues this fundraising event and others, with huge success! Wendy’s proven marketing & sponsorship skills remain an asset to Center Stage.

Wendy wants to see growth in our community and with the heart of volunteers and support from local businesses, it’s inevitable. She has met so many wonderfully talented people and made some lifelong friendships with Center Stage. Wendy cannot wait to see what Center Stage Jackson does in the upcoming years! and the Michigan Theatre of Jackson in leadership roles. Tom is a lifelong Jackson resident and is passionate about the arts and the importance of the arts in a community.  Strong performing arts organizations such as Center Stage Jackson greatly improve the quality of life in our community.

Tom played trumpet in the Jackson Symphony Orchestra for over thirty years and currently plays cornet with the Capital City Brass Band.  Tom has also played in the pit orchestra for numerous theater productions around town.

Tom retired from Consumers Energy in 2021.  He lives in Napoleon with his wife Traci, who has played piano for numerous local theatre productions.  She is responsible for getting Tom back in the pit.

Tom has two adult daughters.  Audrey is a super-talented artist and graphic designer and mom to a Great Dane in Jackson.  Adrienne is in her second year of residency in OB/GYN in the Detroit area and mom to a cat. Melissa McElhone has Bachelor’s & Master’s degrees in Theater (and English.) She’s been involved with theater for over 35 years! Melissa joined CSJ in August 2013 & enjoyed performing and directing.Melissa is heavily involved with CSJ’s Youth Theater, having directed the Spring musical since 2014 and enjoyed working with the youth on their recent Zoom productions.  Melissa’s community involvement, church Drama Team & Leader of Jackson’s Mothers of Preschoolers group provides the Board strong leadership & teamwork skills.  Melissa has also trained in Management   Melissa enjoys discovering new ideas and creating excellent theater.  She is well-spoken & hard-working.  Melissa has worked on numerous committees including Sponsorship and Fundraising: Porkapalooza!  She’s been on the Board previously for three years.  Melissa looks forward to developing solid relationships, staying committed, and being dedicated to Center Stage Jackson.

Linda Weber has been an active member of CSJ since 2017. Linda thoroughly enjoyed being part of the ensemble cast in The Drowsy Chaperone, Music Man and Jekyll and Hyde. In addition to being onstage, she also enjoyed being the props manager for the youth theater shows – Rockin’ Robin Hood and Fairy Tale One-Acts. Linda now actively participates in the Jackson Chili Cook-off, representing CSJ and serves on the Sponsorship Committee.

Linda is an Administrative Assistant by profession. In that role, for the last 24 years, she has learned importance of teamwork, the need to be very detailed oriented and have the ability to adjust to ever changing situations. With this background, along with her commitment to the Jackson community and CSJ, she feels she would be an asset to the CSJ Board.

Linda truly believes in CSJ’s mission to cultivate, advance, and promote amateur theater to the Jackson community. She believes together we can keep Center Stage Jackson an active part of Jackson County for years to come!

Preston has been a member of CSJ since 2012, serving briefly on the

board. He is eager and ready to be more involved in the process again, from selection and fundraisers to show post mortem. A short background includes 21 productions in various roles, some multiples and often lending my vocal abilities to the chorus. Along with being on stage, he also assisted backstage in designing, building, and painting sets including three productions in which he was the Technical Director. In addition to his experience with CSJ and other theatrical organizations, he also owned and operated three businesses over the past three decades, retiring the last one, “Judd Brothers Karaoke” this past Spring. Currently, he is employed at REV Group/Spartan ER in Charlotte, Michigan, where he is Team Leader. Preston is 58 years old and has spent almost all of that time in the Jackson area, graduating from Jackson High School in 1983. He has also earned an Associate of Arts/Business Administration degree from The University of Phoenix (2012).

Preston’s strengths would include good organizational skills, time management, working within a budget, and set design and construction. Preston is equally comfortable backstage and on stage. working with local theater groups for many years including Jackson High School Drama Department, The JCC Drama Club, Summer Stage Jackson, The Bon Ton Room and most recently with Center Stage Jackson.  Caryn was the president for the Jackson Community College Drama Club for three years.  Caryn has received her associates degree in Art, focused in theater.  Caryn has also been certified as a Technical Director.  Caryn is experienced in set design and build, sound engineering, stage management and rigging.  Outside of theater, Caryn has extensive knowledge of administration management, sales and marketing.  Caryn would love to put her skills to use to help with Production Marketing and anywhere she is needed.

Talon is a Business Architect and has a bachelor’s degree in Business Administration. His work experience is generally in Business development or Business strategy and for the last 14 years.  Talon has advised businesses in 3 different industries.

To sum it up, as a Business Architect, Talon is a bridge between strategy and execution. He breaks down goals, strategies and

assesses current state capabilities and then builds roadmaps of steps or executable efforts required to achieve those goals, strategies or targets.

Talon believes his skill set would be a benefit to Center Stage Jackson and this community and is looking forward to being more involved at many levels.

Cultivating, advancing, and promoting the appreciation of dramatic arts with the community.